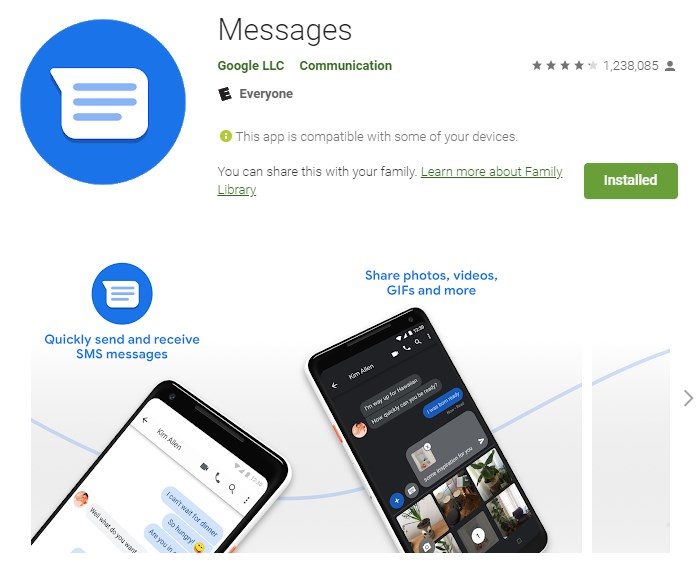 One thing which everyone likes about Google is that the company is trying to improve its current situation, which is the main reason why they have come up with Google Messages. Now recent report shows that Google Messages has surpassed the 500 million installation benchmark, which is an excellent achievement for the company. The application is growing slowly but at a remarkable speed, and now it has achieved the 500 million installation milestone on android play store. Google does not make it compulsory to put this application into a pre-install category, yet it has received such a good response. Although there are some devices in which this application is part of Google Mobile service. The Google Messages is used as the default client for sending and receiving SMS in android devices. Huawei is also that company which has made Google Messages pre-installed in their smartphones. Motorola, LG, and there are some small companies which sell their smartphones by making google messages as a default SMS gateway.

After comparing this application’s performance, we can surely say that it’s an impressive stat because Google Messages lands in the top 25 in the communication category. Nowadays, the default SMS applications are changing, which is the reason why Facebook Messenger and Whatsapp has a huge dominance in India. Google is that tech company which is trying to diversify its investment, and that’s why they have decided to shut down Hangout and Google Plus to focus on more important things. Facebook Messenger and Whatsapp are still mostly used by the people living in the United States of America, but when we see this new stat, it might give hope for Google in the communication category.

It seems like many people like the new interface of Google Messages because of which the number install have increased so fast. However, it will be interesting to see how the company is going to manage this success in the future.

You can Check the App On Playstore- Google Messages